Penang, known as “Pearl of the Orient” to many people, is one of the famous islands in South-East Asia. It is renowned for its culture, food and heritage.

However, this is not all that she has to offer. Minutes away from the busy city center lies another attraction of Penang, her natural beauty. This turtle shaped island offers miles of idyllic beaches with swaying palm trees, and soothing hill for those who seek refuge from the tropical heat.

The capital of Penang, George Town was named after King George III of England. George Town was awarded city status by the royal charter on January 1st 1957. Located in the heart of the city is one of South East Asia’s largest collections of Pre-war buildings. In order to preserve the heritage of Penang, modern structures are built surrounding these pre-war buildings. Some of these structures are built more than 100 years ago. Lots of effort and money has been invested by the state government and private investors to preserve the beauty of these structures. As a reward for the effort, Penang was formally inscribed as a UNESCO World Heritage Site on 7th July 2008.

Take a stroll down the heritage trail to visit the Muslim mosque, Chinese temple, Indian temple and Christian church. One will be surprised that these buildings are

just 5 minutes walk from each other. The closeness of the people from different ethnic group is best reflected by their respect for each other’s culture, festival and tradition.

Besides its beauty and history, one should never miss the delicious hawker foods that are offered around the clock during their stay. Penang offers you great food from prestigious restaurants to hawkers’ carts by the road side.

The State of Penang or Negeri Pulau Pinang in Malay is made up of Penang Island and Province Wellesley which is on the peninsula. In the year 1985, one of South East

Asia’s longest bridge was build across the channel to connect the island with the peninsula. The bridge has great impact on the citizens and the development of the island. The bridge eases the transportation of raw materials and finished products to and from the factories located in the industrial free trade zone of Penang.

Khoo Kongsi is a grand temple that shines brightly along Lebuh Cannon. It was built to serve as a clan-house for ember of the Khoo family. The walls, pillars and roof are richly decorated with intricate carvings bearing the marks ofmaster craftsmen from China and the beams are made from wood of the finest quality. the temple was rebuilt in 1920 after it was gutted by fire. Some belive the fire was brought about because of the resemlace to the Emperor’s Palace in China. During the seventh lunar month, the temple comes alive with Chinese opera performances.

Penang Hill is one of the oldest colonial hill station established by the British during their time in Malaysia. Explored in the late 18th century, a horse trail was cut by the Waterfall Gardens (present day Penang Botanic Gardens) to the summit of the hilly spine of Penang, allowing the British to escape from the chaos of George Town to the cooler climate on the hill.

Penang Hill comprises several hills including Strawberry Hill, Halliburton’s Hill, Flagstaff Hill, Government Hill , Tiger Hill,and Western Hill. The highest point of this range is at Western Hill, with an elevation of 833m (2,723ft )above sea level. The range also serves as the largest water catchment area on the island, and a number of tributaries to major rivers in Penang.

The earliest mode of transport to the hill was via horses, or a system called ‘doolies’, where masters were carried up the hill on special sedan chairs. To further explore the potential of the hill, systems of bridle paths were cut by Indian penal servitude prisoners for the establishment of more bungalows on the hill.

The Penang Hill Funicular Railway was the second mode of transport established for access to the summit. The first railway was constructed in 1901 and completed in 1905 but was rendered useless, due to technical faults. A second railway was commissioned in 1909, and works for the second line started in 1914 with a budget of 1.5 million Straits Dollars. On 1st January 1924, the 2,007m long funicular railway was officially opened by then Governor of Straits Settlement, Sir L.N.Guillemard. The last upgrade was in 1977, before a complete overhaul of the system in 2010.

The Kek Lok Si Temple is a Buddhist temple situated in Air Itam in Penang and is one of the best known temples on the island.The construction of the temple began in 1893 and was inspired by the chief monk of the Goddess of Mercy Temple at Pitt Street. With the support of the consular representative of China in Penang, the project received the sanction of the Manchu Emperor Guangxu, who bestowed a tablet and gift of 70,000 volumes of the Imperial Edition of the Buddhist Sutras. 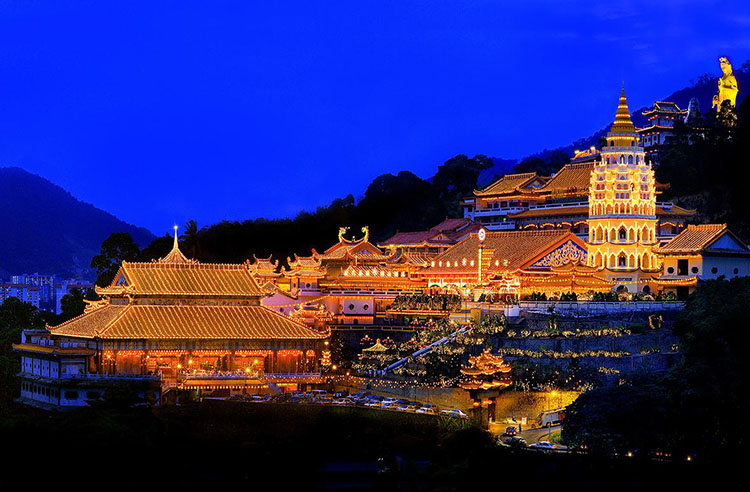 The primary benefector of the the Kek Lok Si Temple in 1906 was none other than Kapitan Chung Keng Quee.In 1930, the seven storey main pagoda of the temple or the Pagoda of 10,000 Buddhas, was completed. This pagoda combines a Chinese octagonal base with a middle tier of Thai design, and a Burmese crown; reflecting the temple’s embrace of both Mahayana and Theravada Buddhism.

In 2002, a 30.2m bronze statue of the Kuan Yin was completed and opened to public. The statue is located on the hillside above the pagoda.The rambling temple consists of many prayer halls, pagodas, bell towers and just about every other typical temple structure you can think of, in varying styles from Burmese to Chinese to Thai. However, two structures dominate the scenery, especially when the temple is seen from afar. One is the seven storey pagoda which dates from the temple’s founding. The other is a huge bronze statue of the Goddess of Mercy, Kuan Yin — a popular diety in Penang. The statue was newly completed in mid-2003 but construction of various surrounding structures is still under way.

Batu Feringghi is the most popular beach destination for tourists and locals on the Penang island. This long stretch of golden sand is the center to a wide range of resorts, water sports, leisure activities and shopping.

On a relative scale, the beach may not be as gorgeous as those found on some islands off Peninsular Malayisa, but you get a wide mix of conveniences and facilities that make staying in Batu Feringgi a highly-accessible and relaxing vacation.

Also, the beautiful scenic backdrops of large granite boulders, fine sand, lush vegetation and calm waters make this the perfect place to enjoy the peace and serenity. The charm and appeal of Batu Feringghi still continues to mesmerize amounts of people.

Batu Feringghi was believed to have been named after the Portuguese word for ‘Foreigners’ Rock’, as the Penang Island was once fought over by many colonial powers including the British, Dutch and Portuguese.

What gives Batu Feringgi its irresistible appeal is the atmosphere; scores of restaurants, watering holes, resorts and recreational places give the beach a ‘never a dull moment’ feel.

A lot of water sports such as jet-skiing, banana boating and parasailing are readily available, and visitors can engage in such activities through the many vendors situated on the beach with their laid-back shaded stalls.

A daily night market takes place in Batu Feringgi, a commercial popularity among crowds, which is another major attraction besides the beaches. 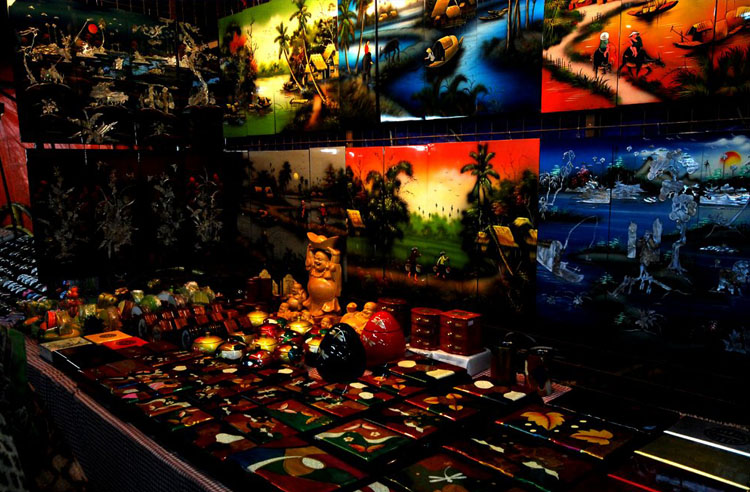 Along the road before the stretch of beach resorts, there are plenty of shops that provide modern conveniences such as groceries, beach wear and souvenirs to cater to your needs during your visit to Batu Feringghi.

Come night, there are numerous joints of pubs and cafes to to kick back your shoes and enjoy the soothing night sea breeze with relaxing tunes and good company.